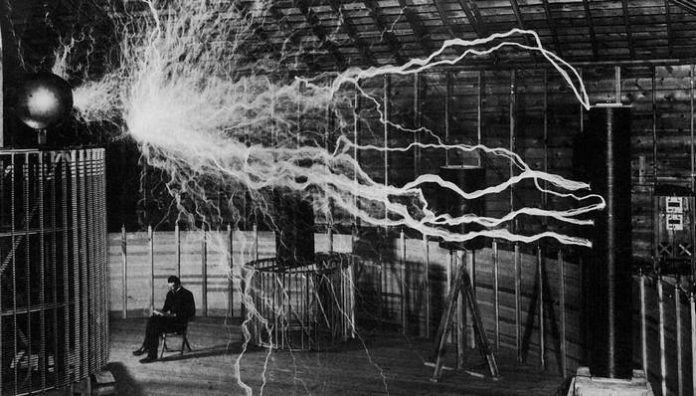 Nikola Tesla is known for many great inventions. Almost all modern power distribution and production systems use Tesla’s designs from over 100 years ago. In addition to that, we have Tesla to thank for radio transmission, remote controls, florescent lighting, automotive starter coils, and even the way we encode multiple signals into a single frequency for broadcast and digital processing.

The first great invention of Tesla was the polyHphase alternating current generator. By using a rotating magnetic field Tesla was able to transfer mechanical energy into electrical energy more effectively than any generator that existed.

When Tesla first proposed the idea to an electrical engineering professor of his, the professor laughed and said it was a perpetual motion machine that would never work.

Many of Tesla’s more “extreme” inventions have been lost to time and the fact that he kept a few important details of each project locked away in his eidetic memory. Tesla was obsessed with the idea of resonance. His inventions became increasingly elaborate, until he began experimenting with the fundamental resonance of the Earth itself.

Tesla’s experiments with resonance of electrical energy led him to design the Tesla coil. The design was based off of an existing spark gap circuit design, which charged a capacitor from the secondary of a high voltage transformer and discharged the capacitor through an air gap. Tesla added a second transformer to the design.

The size of this second resonant circuit had to be exactly ¼ of the wavelength of frequency desired. By doing this the resonator circuit created a second circuit that would build in potential. Using this design Tesla was able to create extremely high voltages and at high frequencies, similar or even exceeding those created by modern radio towers.

The Tesla coil became a mainstay in Tesla’s experiments. By running a wire connected to the resonator around his lab he permeated his lab with
electromagnetic energy. The effect was so great that he could light a florescent bulb in his hand because the voltage drop through the air was great enough to cause a sufficient current flow.

He also reported being able to light a field of bulbs at a distance of 1km using his magnifying transmitter.

In order to understand Tesla’s magnifying transmitter an understanding of the electrical circuit of the earth is necessary. Tesla did a lot of work on this subject.

There are many forces at work on both the Earth’s surface and in the atmosphere. Telluric currents are electrical currents that travel on the Earth’s surface. They are the result of thunderstorms and changes in the magnetosphere of the Earth from solar winds and other intergalactic phenomena.

They are also the result of humans using electric currents and changing magnetic fields. These Telluric currents are very unpredictable, moving mainly toward the equator or polesdepending on the time of day, and are typically of a low current. At the proper frequencies, around 7.3 Hz, the Earth’s impedance drops dramatically.

Tesla compared the Earth to a shiny polished metal ball. The ionosphere is a layer of the upper atmosphere that has a large negative electric
potential. The space between the Earth’s surface and the ionosphere is called the Schumann Resonance Cavity.

Tesla calculated the resonant frequency of this cavity to be 11.3 Hz. In 1963 it was confirmed that this space does have several resonances
with a fundamental frequency of 7.86 Hz, although that changes based on environmental conditions.

Tesla’s proposal for wireless power was to create a large electric potential at the resonant frequency of the cavity. This would create a standing wave of electric potential around the world, which could be tapped into by any circuit tuned to the same frequency. Tesla meant to tap into the telluric current of the Earth and create the electric potential of the standing wave at the same frequency, using the Earth’s current to power his circuits. This design would require many repeater stations stet up around the globe, as the strength of the signal is inversely proportional to the
distance from the transmitter.

In the modern world the Schumann resonances are used to track global lightning patterns, and telluric currents are being researched as a method of predicting earthquakes.

These ties of the Earth’s resonance to Tesla have led many people to wonder about the nature of some of Tesla’s experiments.

The story of Tesla almost bringing a building down with a small mechanical oscillator raises interest in Tesla’s experiments with Earth resonance and telluric currents.

Could artificial telluric currents of a resonant frequency cause an earthquake? Could Tesla have been the first man with the power to destroy the whole world? Intriguing questions but unfortunately ones that have been lost to time.

One exploitation of the Earth circuit that Tesla did discuss was weather control. He proposed a high potential antenna array of an extremely low frequency could attract and repel the ionosphere in an attempt to control the barometric pressure beneath it. He never claimed to have attempted this but many such arrays exist today, such as the H.A.A.R.P installation in Alaska.

They are necessary in studying the ionosphere as it changes in response to intergalactic radiation.

The most intriguing of Tesla’s inventions to most people is his “Peace Beam” or “Teleforce”. Tesla claimed to be inspired by an air powered cork gun he had as a child. His design used a circulating air current to create a large static charge, similar to a Van De Graaff generator but 10 time greater potential.

This static charge was used to propel a string of single molecules of tungsten, which had been charged to a high potential. This highly repellent force would accelerate the stream of tungsten, projected from an openHended vacuum tube, to 48 times the speed of sound.

Since the particle stream was comprised of microscopically thin matter and not just electromagnetic radiation, as in a ray, its energy would not dissipate over a great distance. Tesla claimed it would melt through all but the thickest metals and said he had tested it.

Facebook
Twitter
Previous articleHealing with Sound, Frequency, and Vibration
Next articleFuture batteries: Charge in seconds, last months and power over the air

Future batteries: Charge in seconds, last months and power over the air

While smartphones, smart homes and even smart wearables are growing ever more advanced, they're still limited by power. The battery hasn't advanced in decades. But we're on...
Read more
Renewable Energy

Living off the grid – the realities

WHEN Jeff and Marg Foster took on the 160-hectare “Bendee” outside of Bingara in 2011 it was a no-brainer when it came to...
Read more

Let's recap: the world is being secretly manipulated by a Satanic cult. It sounds outrageous, but every Christian believes it even...
Read more

The definition of conspiracy is "a secret plan by a group to do something unlawful or harmful". Conspiracies have existed our entire...
Read more
Load more