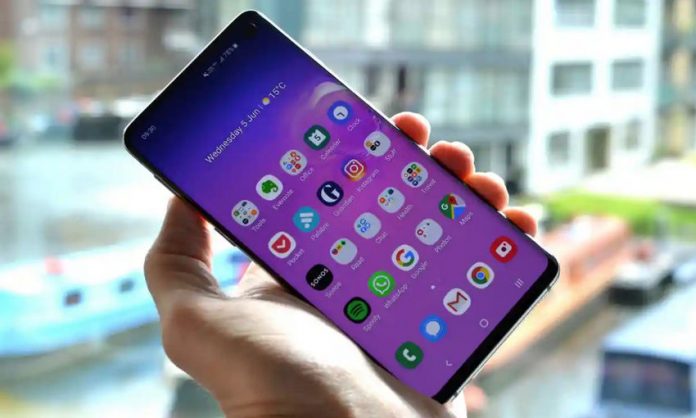 The Galaxy S10 is Samsung’s middle-of-the-road top-end phone, featuring a large screen in a pretty compact body for those who don’t like the current breed of massive flagship superphones.

The regular, non-plus versions of Samsung’s Galaxy S line have always been the sweet spot between size, price and performance. They offer big, beautiful screens in bodies that are practically tiny by today’s giant-phone standards.

Its size and weight make it one of easiest top-end phones to handle and pocket. Not once did the Galaxy S10 feel liable to being dropped, even when using it one-handed in packed trains.

The design of the Galaxy S10 is attractive, particularly in its pearlescent white, but doesn’t rock the boat. The front is glass; so is the back. They both curve at the edges to a thin polished metal band. The screen has a small circular cutout through which the selfie camera pokes.

The display also hides Samsung’s ultrasonic fingerprint scanner for unlocking the phone with your thumb on the screen. Arguably the most unusual aspect of the Galaxy S10 is the existence of a headphone socket in the bottom – a rare sight for a top-end smartphone in 2019.

The phone is water resistant to IP68 standards, or depths of up to 1.5 metres in fresh water for 30 minutes. Drop the S10 in the loo and you’ll be able to rinse it afterwards.

The Galaxy S10 has the same processor, memory and storage as the larger Galaxy S10+ and therefore performs similarly. In this US this means Qualcomm’s Snapdragon 855 processor, but outside in the UK, Europe and many other regions it means Samsung’s own Exynos 9820, as tested here.

Generally the S10 is as snappy as most of the competition, with no noticeable lag. It won’t match the very fastest phones, such as the OnePlus 7 Pro, but it keeps up with the competition and is a big leap over the two-year-old Galaxy S8.

Battery life on the S10 was a disappointing 25 hours between charges. With the screen set to FHD+ and the always-on display (AOD) setting off, the phone would last from 7am on day one until 8am on day two, dying on the train into work. That was while browsing and using apps for five hours with plenty of push messages and emails, watching 60 minutes of offline video, shooting about five photos a day and listening to about five hours of Spotify using Bluetooth headphones.

Cabled charging was fairly slow for the Galaxy S10 too, hitting 77% in an hour, but taking one hour 38 minutes to reach 100% – Huawei’s P30 Pro is fully charged in less than an hour. Wireless charging at up to 15W with a Qi charging matt works well, as does wireless power sharing, turning the phone into an ad-hoc wireless charger for something else.

How to Lose Weight Fast

There are many ways to lose a lot of weight fast. However, most of them will make you hungry and unsatisfied.
Read more
Cryptocurrency

What is Cardano & ADA? In a nutshell, Cardano is an advanced blockchain platform, and ADA is a cryptocurrency...
Read more