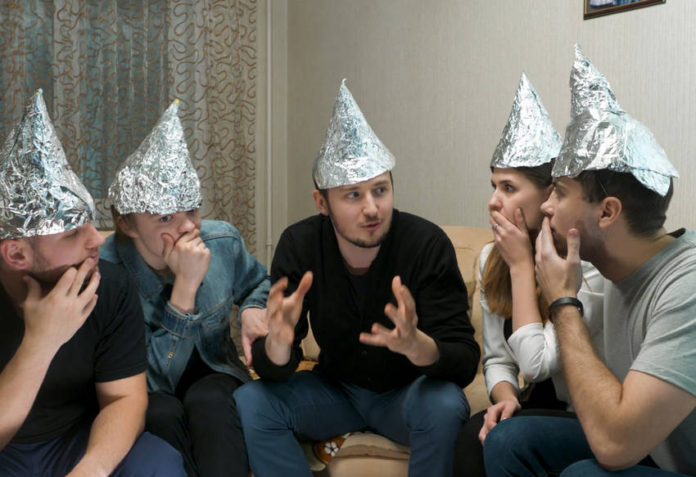 The definition of conspiracy is “a secret plan by a group to do something unlawful or harmful”. Conspiracies have existed our entire history. But when you hear the word “conspiracy”, you might think of strange “loners” wearing tin-foil hats. This stereotype makes it difficult for legitimate researchers to expose real conspiracies.

One Real Conspiracy Affecting You Today

Wealthy people wanting to maintain and expand their wealth isn’t new. There are real conspiracies involving money and power. Here’s one example:

Banks make money from nothing via a process called “fractional reserve banking”. For example, if you deposit $100 with a bank, they can loan out $1,000. 10% of the loaned money is yours, and the remaining 90% didn’t even exist. Imagine if you could loan out money you didn’t even have. Well that’s what banks literally do. And they’ll steal your house if you don’;t pay back the loan of funds they literally made up.

It sounds ridiculous, but it’s absolutely true. And the implications are that banks constantly create new money, which creates inflation that de-values money you have. It is basically legal theft. There are much better pages and videos that explain this. I’m only explaining the basics to make a point.

In Banking Law a Conspiracy, or Just Bad Policy?

If you think I’ve somehow misrepresented the banking laws, you need to do better research. There’s no mistake. Once you understand how bankers legally steal from us, you might wonder how on Earth the politicians who represent us can allow this to happen.

Bank laws were passed by politicians who are either incompetent, or part of a conspiracy.

Whether it’s politician incompetence, or a conspiracy, something is seriously wrong. But that’s not the point of this article.

How “Theories” Like Flat Earth Distract People From Real Conspiracies

If you were part of a real conspiracy, an easy way to protect yourself is claim your accusers of “wearing tin foil hats”. Then less-intelligent people are more likely to ignore anything you say, no matter how accurate it was.

Most people judge an article from its headline, without reading the details. It’s an instinctive but poor reaction, because they wont know the truth.

A few years ago, the Flat Earth conspiracies began to grow again. I thought it was a hoax, because I couldn’t understand why anyone would actually believe Earth was flat. but people really believed it.

As I don’t like it when people don’t listen to my theories and reasoning, I contacted some people who believed in Flat Earth. I asked them questions, and specifically to give me their “best proof” of Flat Earth. Unfortunately, all I got was a mess of poor understanding. And all the proof indicated Earth was indeed round – not flat. At least I had an open mind.

When I tried to explain to the “Flat Earthers” their mistakes, they accused me of being a shill, and possibly part of the conspiracy.

Then I realized some people are dumber than I thought.

I don’t know what the cure for “stupid” is. I understand that everyone has different levels of intelligence. But you don’t need to be intelligent to look at basic information, and correlate it to what you know from your own observations. It’s not hard.

Because I found Flat Earth theory to be so damn stupid, with no substantiated evidence, I’ll often call someone a “flat earther” when they say something stupid. I don’t mean to poke fun at them, but they just aren’t getting it.

I even ask them WHY does it matter if the Earth is flat. Nobody has given me a convincing answer. I tell them to forget about Earth’s shape and focus on conspiracies that actually matter. If Earth is flat, so what? We can still live on it, right? We can focus on Earth’s shape after we’ve sorted out more important issues – the real conspiracies going on, which affect all of us every day.

So if you’re a conspiracy theorist, don’t make unsubstantiated claims. Back your claims with information people can verify. Otherwise you’re doing more harm than good. You may even be used as a tool by real conspirators to throw people off track.

Waving a sign and making noise - that's essentially what protests are. When is it beneficial, and when are they a...
Read more